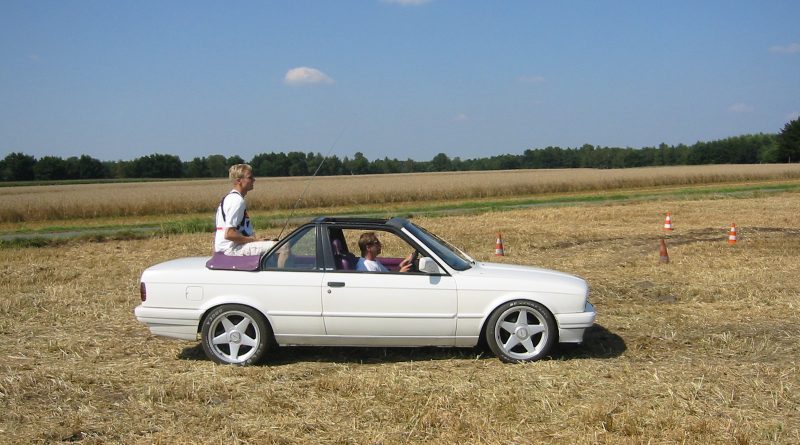 Every person who has a RC hobby dreams of sitting at the passenger’s seat and and controlling a car or flying an airplane / helicopter. Looking outside and imagining the “toy” flying next to you.

Well I have a nice memory that I participated in an event called Emsland-Rallye Haselünne in Germany in 2002. A friend of my flight club asked me to take part of this rally with my Henseleit Three Dee NT.

The things I recall:

Before accepting the challenge my friend arranged a test run at our own flight field. He would come with his car and I would jump in the backseat. He started driving along some acre fields when I flew the helicopter near / next to the car. Yeah, that was fun. So I said let’s go for it.

So we went for the competition. A couple of airplane (I guess 20) and 3 helicopter pilots signed in. My Three Dee NT needed some modifications to be able to fly 45 minutes (at least) non stop. So I added a 750ml tank extra to the 500ml tank in the helicopter. Reduced the head speed to a “normal” head speed. Tested at the flight field how the tank in serie functioned and timed the time it took to empty the external tank. This setup would allow me to fly 60 minutes with normal power and reduced agility. Remember here are no extra sensors and safety functions like the Vstabi Rescue!

So the time had come, nervous of course because my friend crashed his RC-Helicopter during his first run.

And yes he was a better pilot than I was. So, I was of course also nervous of crashing my precious Three Dee NT. Anyhow, we took off for the 18km course. One driver, one caller and me in the backseat. And off we went!

I can only say it was a big adventure. Long straight roads with tree lines where it was key to keep the helicopter steady and hope to see it again at the end of the tree line – while the car kept on going full throttle. It was quite an experience being in a car driving at 100km/h, sitting in the back with my legs fixated in the safety belts. We drove on public roads and off roads bumping up and down and I kept monitoring my helicopter at ALL times.

Arriving within about 20 minutes at the first checkpoint, the audience was astonished. “You actually made it to this point?” they asked and gave me the challenge to fly an 8. (They were clearly not prepared that someone made it that far. And the journey continued. I can only remember all the trees and more trees where the helicopter was out of site for a max of 10 to 20 seconds. I held the controls in the last position and prayed that after the tree lines I found my helicopter still in the sky.

Yes I made it to the end. Last walk without car to the finish line.

The helicopter and I made it to the end…. Who was watching the time?

Arriving at the finish everybody including me where shocked that the helicopter arrived in one peace.  Yes I did it!?!

The third person never started with his helicotper and they asked me if I would like to take a second run. But knowing that the second run I could not win anything but only crash my helicopter I passed the request.

And now still next to my Henseleit Three Dee NT helicopter, stands the trophy! First place in RC-rally.

As far as I know this RC-rally was the last one they organised. Something with legislation and permits, that is why this event stopped. But still a nice memory for me and my helicopter that we achieved the 18km course.