complies with the new FAI rules for world record attempts with a take-off weight below 5kg and the maximum allowed 10S battery.

The TDS was first introduced in its original version in 2013, but was only produced in a trainer version of the TDR-II with closed canopy and standard tail rotor.
The TDR-II with the closed speed canopy is worldwide the fastest stock machine and holds the current world record.
Nevertheless, it was important to me to go on with the originally pure TDS speed machine once again, as it promises further advantages through the even better aerodynamics because of the tail rotor inside the tail fin and the 8 ° forwardly inclined rotor shaft.
Due to the rotor inclination, the entire fuselage will produce less air resistance.

Many experiences of the last years with the TDR-II in terms of compact design with extremely durable transmissions and the new experience with the TDFun, an extreme lightweight construction has become a whole new symbiosis of both, but similar to a Formula 1 race car exclusively on speed flies or even beautiful spacious elegant flying style is designed.

Due to its aerodynamic shape, the tail rotor design and the rotor blade or swash plate linkage, this machine is not suitable for 3D flight!
All sorts of combinations of huge loops, long rolls or even extremely long knife edge flights are perfect.

In contrast to the original concept of the TDR-II was here dispensed with everything that brings unnecessary weight. The linear drive was omitted because it was not realizable in this pure lightweight speed machine for weight and space reasons.

The articulation geometry has been designed in such a way that with a blade presetting of + 5 ° pitch with a total stroke of approx. +/- 12 ° it is possible that there is virtually no angle distortion at maximum pitch and additional cyclical deflections.
So you get about -7 ° to + 17 ° pitch range, which is ideal for Speeding and even for an emergency autorotation and allows sensitive pitch management at the high rotor speeds.

In order to have more reserves for an emergency autorotation, a not rotating tail rotor was also omitted (but can optionally be converted to co-rotating). Since in a motor failure, the tail rotor stops immediately as well, so you have much earlier an audible or visual warning signal, since the tail rotor is always the clearest to hear. In this way, you can react in good time, even in the distance, before the main rotor stops and rescues the machine. By the tail fin, the fuslage is always aligned clean with low forward speed, so you can control the helicopter even without a turning tail rotor still to the desired landing place.

Servos for both the swashplate and the tail rotor has to be the MKS HBL575 SL from the X6 series. These servos impress with their performance data and have standard dimensions in length and width, but are much flatter in height.

I did not want to compromise on a specific machine like the TDS, so these servos are practically a part of the design.

Attention! Servos with higher housings do not fit.

Thanks to the TDR-II modified transmission concept, it has been possible to make the core mechanics even more compact and still be able to transmit these enormous forces.

The center chassis width of only 30mm with very small bearing plates results in an enormous rigidity with lowest weight.

The servos are completely shifted outwards and everything is very accessible despite the compactness.

In the second gear step, a similar gear was used as at the TDR-II, which is extreme robust. In the first stage, I used a belt this time, so that I could move the intermediate shaft to the front of the rotor shaft for compactness reasons and getting the right center of gravity.

Also, the tail boom with the tail could be moved so further forward. This solved the center of gravity problems that existed in the first TDS study.

Through various tooth belt pulleys for the motor from 22-T to 26-T, reductions of 9.64: 1 to 8.16: 1 are possible. The tail rotor gear ratio is lower at 1: 4,27, so the tail rotor speed is not so extremely high at the high main rotor speeds. This gives the helicopter, even at high speeds, a pleasant crisp sound, because the main rotor noise is not drowned out by a shrieking tail rotor.

The empty weight of the TDS helicopter mechanics with completely closed canopy and the profiled tail boom with molded vertical stabilizer is about 1800g.

Here is a compilation with sample equipment for the TDS-FAI compatible version with a take-off weight of 4.9 kg: 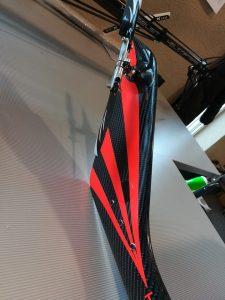 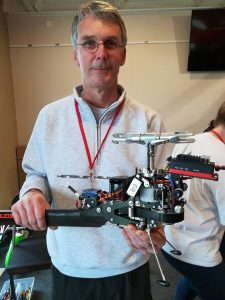 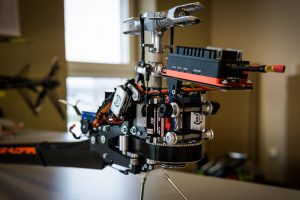 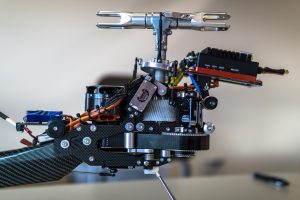