The Three Dee MP came in various combinations into the market. The MP meaning (Multi-Purpose) helicopter. This was at the time that the electric (Lipo batteries) came along and where at the break-even point. The MP could have an electric chassis, electric chassis which could be switched in “minutes”. 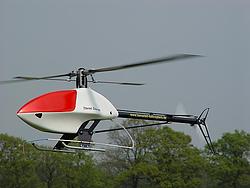 In general the MP came in 5 flavors.

This clearly shows that the market was changing in 2004 and there was a competition between electric and methanol (gass) helicopters. The MP-e (the helicopter I fly) was one of the first with 10s lipo’s. There was a special mounting device developed to achieve a 10s5p battery.

Of course currently there are no 10sp5 lipo’s more in the MPe. At that time they had a maximum discharge of 20C and cost 400 Euro for each pack where the hobbyking lipo’s are much cheaper and have a better performance. Why hobbyking? The engine and controller have limited power to the standards of 2017. 60C discharge is not applicable for this setup.

At the time where the MP was introduced it had an enormous amount of power and by installing the Vstabi system it gained another (5 to 10%) extra power for losing the rotor head  paddles.

Nowadays I fly this helicopter with lots of fun but more as an collector’s item. Spare parts are rare, and it is just a very nice machine to see. Therefor only one battery pack is enough. It brings a smile on my face knowing that this machine was again a time changer in the RC-helicopter market where the aim for more electric power began.