The purpose of a RC helicopter gyro is to make flying easier. This gyro is nowadays a small device that detects the yaw motion (left or right swinging) of a helicopter and automatically sends a command to the tail rotor-servo to correct and stop/limit the yaw movement in order to keep the nose pointing to the original and controlled direction.

When the RC-helicopter was first created, it had not gyro. All yaw movements and corrections had to be made by the pilot. Because of its light weight and high rotor speed the yaw movements were very sensitive and could thus cause sudden movements in the pitch. Real helicopters nowadays still don’t use gyro’s for tail yaw correction, the pilot has to compensate it by himself.

In the 90’s the first gyro’s where produced by Futaba. This was a dual weight fly wheel which could detect yaw motion. This mechanical gyro was the first to help RC-helicopter pilot’s to control the nose / tail movement so the pilot could focus more on all the other functions. This is called “normall” mode or rate mode of the gyro. 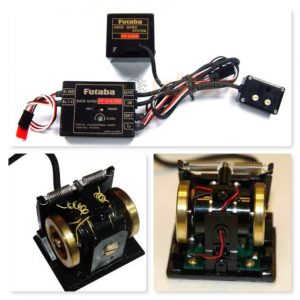 The end 90’s beginning 2000 the company called CSM (in England, unfortunately I don’t recall the name of I had the honer to meet him a couple of times) made the first Heading Hold (HH) gyro’s. The  CSM 360 and the more advanced CSM 540 gyro.  These gyro’s where the first who had an internal PID controller who could calculate the angle off yaw and reponded back to get back in the “same” direction. So that the nose and the tail of the helicopter stand still. They used  a non-mechanical SMM (silicone micro machine) to detect yaw motion.

Also here Futaba made a gyro made history, the well know gy401 with 9253 servo was a perfect combination. Affortable, small and very reliable. And of course later on in many different combination like the gy601.. 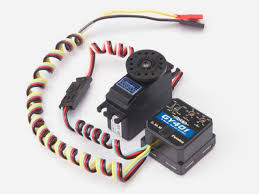 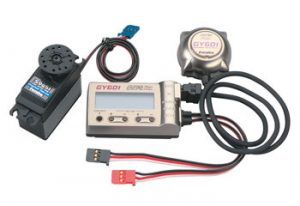 With this gyro’s it enabbled stunts like tail slides, fast backwards flight, and all manner of “3D” stunts that were beyond the reach of all but the most skilled pilots. Along with these advanced gyros came extremely fast and precise servos. These servos were designed specifically to be used with heading hold gyros and the combination offered such an improvement over the older mechanical designs that the entire market shifted to heading hold gyros.

RC helicopter gyros available today use either a non-mechanical piezo crystal yaw detector or better yet, a non-mechanical SMM (silicone micro machine) gyro. With no moving parts, the reliability and lifespan is a huge improvement over the older mechanical gyros as well.