The Kyosho burns was the RC-car where my grandfather and I played a lot with. This 4WD was bought secondhand and we experimented a by trying to setup the servo’s but more setting up the engine. Without any real knowledge we turned all the 3 screws for air, gas mixture so that in the late evening a short run of 5 seconds was our high moment of the day. 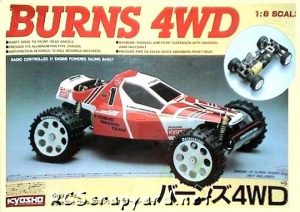 Finally we got the information from RC-car clubs and people explained how everything works and what the basic setup was so that after some introduction in Nitro engines we could go out and have fun driving this car.

Did I write driving? At the parking-lots it was more trying to make the engine run again as after the runs fix the car again because of some unknown dis functionality. This was the hobby period where we learned a lot by testing, failing and trying again. Next to this kyosho Burns we had a 2WD Leopard RC-car. The smell of nitro and methanol was addicted some type of virus was in the air. The need for more info en excitement of this hobby got bigger and bigger by failing but more knowing that the 5 seconds of high moments could become 10 seconds 😉 and maybe in the near future drive a full 10CC gas tank empty. 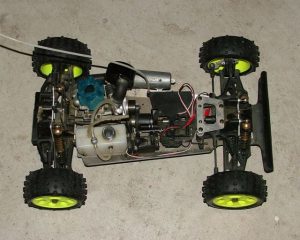 Unfortunately this car is no longer in my possession, there machine was to old and no spare parts where available anymore. To many parts need to be exchanged and rebuilding an extreme old engine would not work. Therefor I bought (much later) the Robitronic Protos to drive same RC-car..