The Henseleit Three Dee Rigid II, also called TDR II and TDS where the S stands for Speed, is a machine which can be compared witch a Swiss watch in terms of: 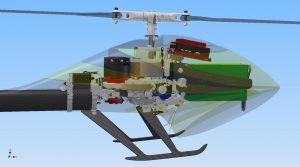 This machine is sort of Jan Henseleit (the owner / inventor / creator of Henseleit Helicopters) passion of making extreme machines and his eager of make the ultimate speed machine. Jan was always ahead in time with his helicopter designs but this was his real second attempt of a speed RC-helicopter made by his hands.

New about this machine is the extreme carbon chassis with big gear which could hold 15 kWatt of motor energie. (the basic motor already capable of produces 5 kWatt continuously). I am thinking to upscale the current Kontronik pyro 800-48 to a pyro 900 which can produce 7kWatt continuously and should give me some advantage in the speed light competition. But I know it is already possible to fit a Scorpion or Xnova engine in this machine which should be able to produce 10kWatt!!!

My rigid II has the following setup:

Which results in this beautiful machine 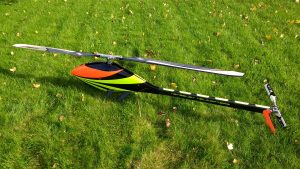 This is my Rigid II but I think it show how the retracts work. Later on I make a good movie of my Rigid II.