It’s fairly obvious that helicopters develop lift from their spinning rotor blades, but how are helicopters controlled? The pilot has four basic controls, much like an airplane; aileron and elevator (often called cyclic on a helicopter), rudder, and throttle/collective.

The cyclic controls (aileron and elevator) cause the helicopter to tilt left, right, forward and backward. This is achieved by changing the pitch of the blades as they rotate. Imagine increasing the blade pitch (and therefore lift) when the blade is at the rear of the helicopter, and decreasing it when it’s toward the front of the helicopter, constantly changing pitch through each rotation. You might imagine that the increased lift in the rear and decreased lift in the front would cause the machine to tip forward. Although this is good for conceptual purposes, it’s not what really happens. The spinning rotorblades actually create a gyroscope, and when you put a force on a gyroscope, it tilts in a direction 90 degrees from the direction the force was applied. Because of this, the blade pitch needs to be increased and decreased 90 degrees in advance of where you might initially think. In the example above where the pitch in increased when at the rear of the helicopter, the machine would actually tilt left or right depending on whether the blades rotated clockwise or counterclockwise.

The blade pitch is controlled by the swashplate. The swashplate is actually two plates connected by a bearing that the main shaft goes through. The bottom of the swashplate is tilted by pilot controls (or servos in a model). The top plate rotates at the same speed as the blades and in a simple system, is attached to the leading or trailing edge of each main blade with a linkage. As the plate is tipped forward, this linkage increases and decreases the blade pitch when the blade is at the left and right sides of the helicopter and through the magic of the gyroscopic effect, the helicopter pitches forward.

Some models are built using this simple system, but is has it’s drawbacks. The main drawback is that a small amount of pitch change can pitch the machine very quickly. For model helicopters, it is often too quickly, makingthe model difficult or impossible to fly. 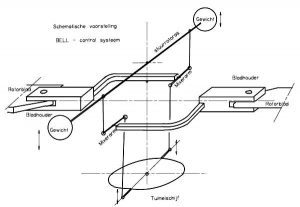 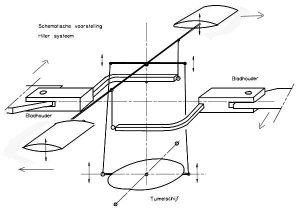 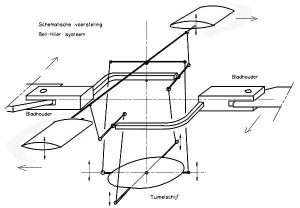