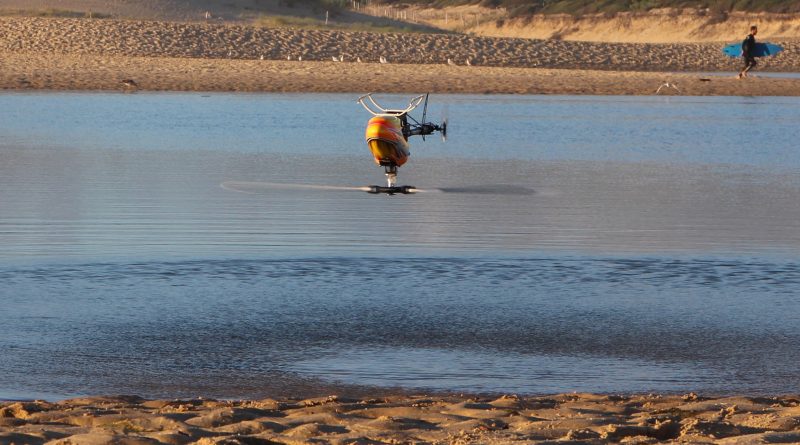 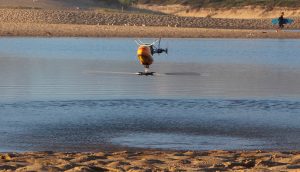 We were finally set for our big summer surfing holiday in France. Sun, good food, late evening BBQs and some helicopter flying. The idea of bringing the logo 400 SE with us to fly in the evening sun over the sea put an immediate smile on my face. Carmen would go for an evening surf and I would do some flying on the side. What could go wrong? Nothing, you think..?

The car was fully packed for some serious flights. Checklist…

I thought of everything, checked and re-checked my list. Nothing forgotten? No. So we were all set and went on our surfing holiday at the beach with the Logo 400 SE and of course, the surf board.

On the road to our destination I was dreaming of the idea of flying every evening for 3 weeks.. 3 weeks * 2 packs will be about 42 flights.

Once there, the helicopter needed to do its first flight on the beach – on the very first evening. Let’s see how cool it is to fly over the water, the ocean. Can you picture that? That beautiful sight? 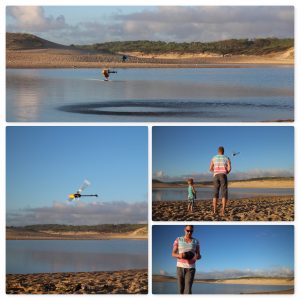 The first battery pack was installed and the helicopter was ready for takeoff…. Everything was smooth, almost no wind and Carmen was taking some nice pictures for the website and blog item. Everything was going great. Fun and a huge smile on my face, until disaster struck.

By a low flyby the skits of the Logo 400 SE gently touched the water….Ah! What was that? The water was barely touched…but still… Could the be really that bad?

The helicopter flew 1 meter above the water and suddenly the Logo 400 SE turned into a smoking machine. The rotor speed reduced rapidly and the helicopter went from flying in the air into swimming in the ocean. A submarine, you could say. Complete and utter shock hit me. I froze. I looked at Carmen and she looked at me saying: Get in the water and get that helicopter out of there!

I ran into the water and it started to sink in, what actually happened. While swimming I thought: Hey, this water is salty….Ah! Salt! Swim faster, swim faster, faster….

I saw the logo 400 SE about 1 meter under water and by bringing it to surface smoke came out of the controller. I quickly disconnected the new – yes, you read that well, new –  6s Lipo (batteries).. and got it back to the beach. One more look at each other and we ran back to the nearest showers to get all that salt off. 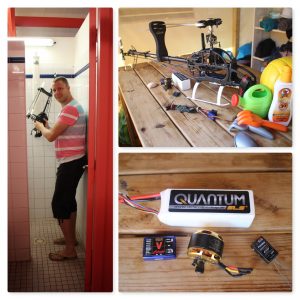 I took a shower with the Logo 400 SE (yes I took the lipo out), and washed the logo – without soap ofcourse. And some extra water through the engine. All bearings were washed extra… and I hope I saved as much as I could.

When home, I took out the following:

And once again, washed everything with clean water once again.

All I could do was wait. Let it dry and see what else I could do. The holiday continued, but at home I will have to check what is still working and what has died. I can also say, this is the first crash where no axes / blades  / tailboom was damaged…

I opened the Hacker speed controller and I assume that the first drop of water entered at the battery input when both elco’s exploded. (wasn’t there a full warranty or 50% discount by crash?) 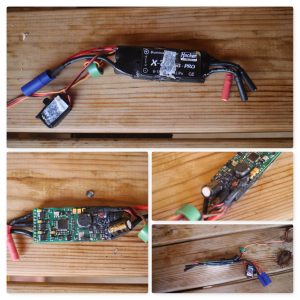 So far, we are having a great holiday. However, the plan of  42 flights ended after one flight….. At least we still have the pictures. 😉

All tips and suggestions are welcome 😉