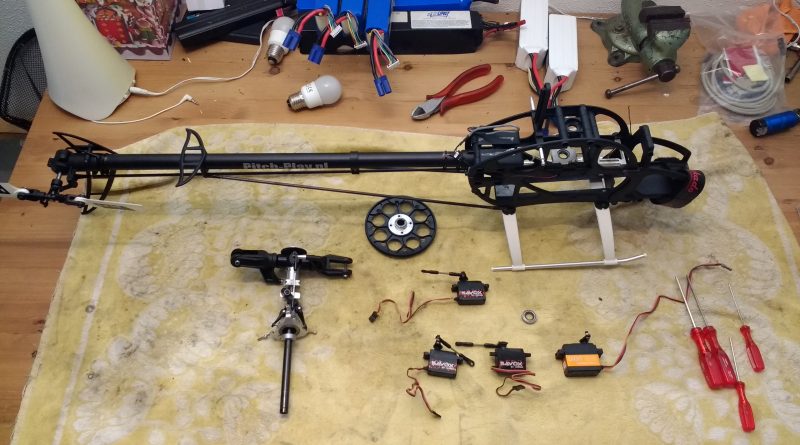 After the salt-water-ocean-crash, a serious investigation to all parts needed to be made.

I started to take the Logo 400 SE apart. My biggest concern were the servo’s. How and did they survive the salt water? Thy are not moving anymore.

As written in the post: Surfing holiday with the Logo 400 not a good idea! Once we arrived home, the crash’s impact and a thorough analysis started. The Vstabi and sensor were sent to Mikado and the Hacker X-70 controller sent to Hacker. 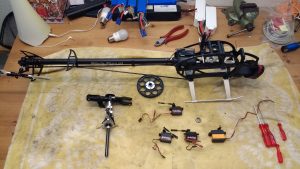 In the beginning I was very hopeful, I thought that the servo’s were waterproof. But taking the servo’s apart piece by piece I saw that salt water had reached every part. The bearings, the servo gears and even the motor have traces of rust.

After a good and proper inspection, I could make two conclusions: 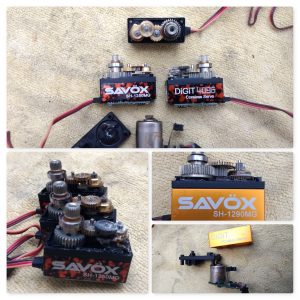 After takging all the servo’s out I also started to take a closer look to all the bearings in the Logo 400 SE. Long story short, non of them really survived it. All of them have some corrosion, some more and some less but in general they all need to be replaced. The picture below shows the bearing in the rotor head which where lubricated but now are also starting to show signs of corrosion. 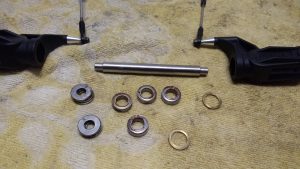 Lesson learned I would say.

Flying above sea water and making a submarine out of your rc-helicopter crash is much more expensive than a crash on the field. Some servo’s gears can be saved as spare parts but in general all 4 servo’s need to be replaced and all bearings. The rotor blades and all NON-metal parts survived but all other parts are is serious condition.

At Hacker-Motor they offered me a 30% discount on the 99 Euro speed controller. That is a very nice offer but I told them to wait so I could make a complete analysis of the costs.

And the Vstabi? how did he survive? still waiting for an answer on that one.. Package is on the way and waiting of the test results… (or as it could go… the package did not arrive in 2 weeks time).. and no, there is no track and trace :-(. Still hopeful..

What do we have left?

I made a quick component list to see overall costs:

Think the option is clear, I would love to fly this little fun machine again but replacing some components is possible but not all pieces. The Logo 400 SE, a product which runs out of production at Mikado, so we can just sit and wait.

I know one day the funny machine will fly again 😉