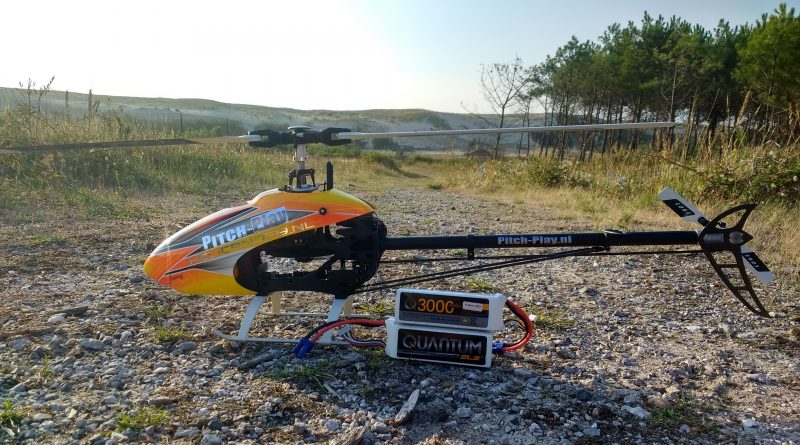 After much contemplation and many doubts, I decided to take the logo 400 SE I had rebuilt last year on our summer holiday to France. Once again, the family would enjoy surfing and the pool, and I would enjoy flying and practicing new tricks with my logo 400.

The crash from last year, with salt water was still fresh in my memory, and I assured myself that it would not happen again. I would simply stay far away from the salt waters and be more careful. 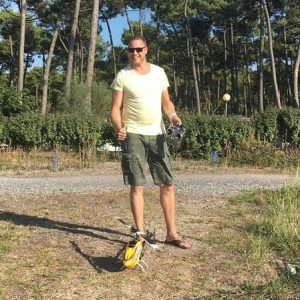 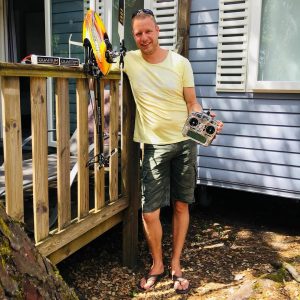 Arriving at our location at the west coast of France the weather was perfect and as a family we settled and enjoyed our well deserved vacation. At day 2 I started charging the Lipo batteries after finding a nice flying location in the dunes. Great view, nice place to fly while letting the other guests at the camping enjoy their rest.

As the days went by my confidence grew and I started to practice some of my more difficult moves as well as new ones. My personal difficult level is the invert flying 8 (flying the figure 8 in the air, but with the helicopter upside down), getting the controls mixed up is something that happens a lot. However, with the great location, good weather and good vibes, I set my goal for the vacation: I would have the inverted flying 8 under control. Because, after 3 weeks of flying I should be confident enough to fly that figure, shouldn’t I?

After one week of flying I only had one small setback. I had to auto-rotate after some heavy tail turns and stops due to a tail rotor that suddenly became loose. However, this minor setback was easily repaired  by adding new fresh loctite and tightening it strongly to the shaft. The fun could continue.

So, once again, I set off to the flying location. A short 15 minute walk through the dunes, blue sky and a warm soft breeze. I soon found that I was not the only person who thought the location was a great flying location – another french pilot was flying a depron plane. Good company. I set my logo 400 on the ground and got ready for some more practice. This time around, I chose a different location not to far away, it wasn’t as open as the other location and closer to the dunes and trees.  But I had enough experience from last week practice, I thought!

I started as planned with normal soft 3D flight and then continued to practice the inverted 8. The left turn went  good, and then a turn to the right… Small mistake, correction…Wait, I see tree, I need to add more negative to climb the helicopter and suddenly… it was gone.

Where the hell did it go?

I heard some small crackling noises and the sweat started dripping off my forehead.

My natural instinct told me to start running after it. What could happen in a dune? How can it just disappear?

Suddenly I started to smell something burnt. Smoke? In the dunes? Oh shit…Fire! I looked at the French pilot guy and he did not look so relaxed as when I first saw him, we both knew something was wrong and as if we both suddenly spoke a common language we started running towards the dunes and the small bushes.

Where the hell did it go? Well, I spotted it. I spotted the logo 400 nose down in the sand fully in flames. The flames kept getting bigger and bigger. One moment it crossed my mind to save my battery which I recently had purchased but the flames were too big – so snapped out of that thought and I started throwing all the sand I could to kill the fire. Every moment I thought back on my drowning logo 400…

The helicopter burned for about 5 minutes and I think it took me 2 minutes to kill the flames.

I think that somehow the hack speed controller failed and started the fire. I will never buy an open PCB speed controller again. The crash itself would have only been a bent tail rotor and/or main shaft. The fire put everything in to ashes. The only parts in first view which can be re-used are: – tail servo, Vbar Bluetooth model and some screws. The rest is wrecked.

What to do? Buy a second hand logo 400 – again – for fun fly? Or get a TDR-I? And maybe the rescue function of the Vbar Neo is not a bad idea after all…